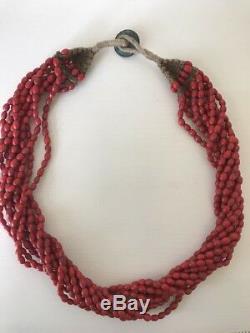 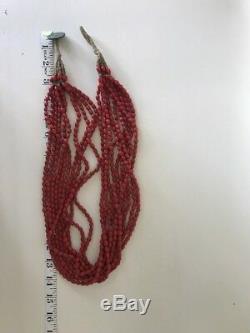 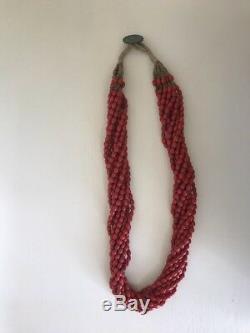 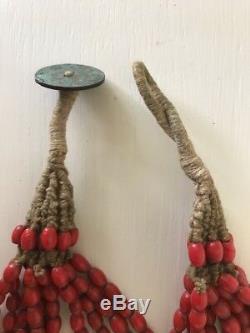 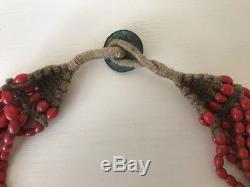 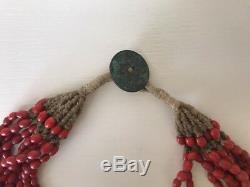 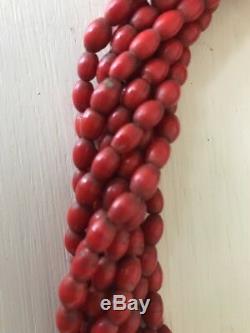 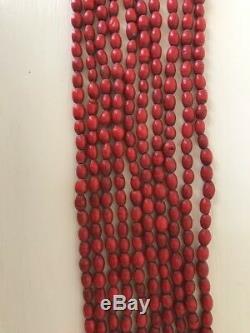 Antique/vintage Tibetan/Nepali Sherpa coral spun glass trade bead necklace brought back from Nepal by a 1960's Peace Corps volunteer who spent 15 years in Nepal, India, Thailand and other Buddhist countries in Asia. Necklace is dated to the mid 1900's by the 1959 Indian King George Quarter used as a clasp. The beads are probably much older and were re-used when the older rope wore out. Ten strands, 26 in length. Each bead is hand blown and measures 3/8 long and 1/4 thick, give or take. The term "Trade Beads" typically applies to beads made predominately in Venice and Bohemia and other European countries from the late 1400s through to the early 1900s and traded in Africa and the Americas. Many of these beads have been attributed to being made in Germany, France and the Netherlands as well. The heyday of this "trade" period was from the mid 1800s through the early 1900s when millions of these beads were produced and traded in Africa and across Asia.

Sick and Co, based in Germany and Holland was one of the largest bead brokers/importers during this period. Moses Lewin Levin was a bead importer/exporter who operated out of London from 1830 to 1913.

You can see 4 of the Levin trade bead sample cards from 1865 in The History of Beads. The popularity of these beads was revived in late 1960s when they began to be exported from Nepal and Africa into the United States and Europe. The term "Trade Beads" became very popular during this time period and is still used for the same bead reference today. The millefiori beads were also called "Love Beads" and used in necklaces with peace symbols during the Hippie days.

As the popularity and availability of these old beads grew they started getting "named". We started hearing terms like "Russian Blues", "Dutch Donuts", "King Beads". Although some of these folklore names are totally meaningless... "Lewis and Clarke" beads, they do describe a specific type of bead. And today these beads are more popular and collectable than ever. Thousands of these beads are in private collections around the world. The African Traders are having to go deeper and deeper into Africa and as the Chinese clamp down on Tibet it is becoming more and more difficult to find more of these beads and many styles which were readily available just 5 years ago are no longer seen today. To learn more about "trade beads" please read, The History of Beads (Dubin), Collectable Beads(Liu), Ornaments From the Past: Bead Studies After Beck (Bead Study Trust), The Bead Is Constant (Wilson), Arizona Highways (July1971), Africa Adorned (Fisher) and the John and Ruth Picard series of books; Volume III - Fancy Beads from the West African Trade, Volume IV - White Hearts, Feather and Eye Beads from the West African Trade, VolumeV - Russian Blues, Faceted and Fancy Beads from the West African Trade, Volume VI - Millefiori Beads from the West African Trade and Volume VII - Chevron and Nueva Cadiz Beads. There are exceptional museum collections of trade beads at the Museum of Mankind in London, the Pitt River Museum in Oxford, the Royal Museum of Central Africa in Belgium, the Murano Museum of Glass in Italy, the Tropical Royal Institute of Amsterdam, and the Picard Trade Bead Museum in California, US to name a few. One of the most intriguing aspects to these beads is how they have survived a hundred or more years of wear and the travel through at least three continents.

Another mystery is who wore them before us who will have them next....... Recommended Reading: HISTORY OF BEADS (Dubin).

Please see photos for condition as they are part of the description. The item "Antique Old Tibetan Sherpa Coral Beaded Necklace Nepal" is in sale since Tuesday, October 30, 2018. This item is in the category "Collectibles\Cultures & Ethnicities\Asian\1900-Now\Nepalese & Tibetan". The seller is "1552heidi" and is located in Alna, Maine.