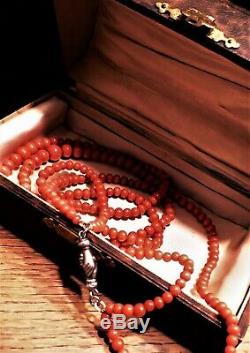 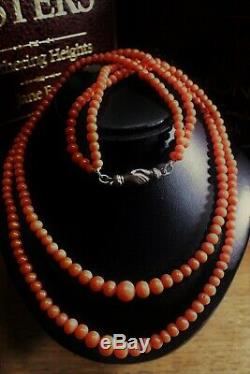 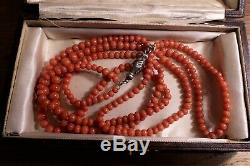 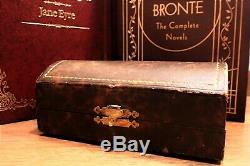 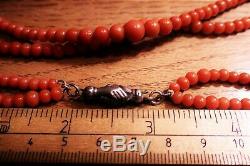 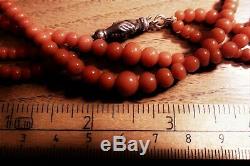 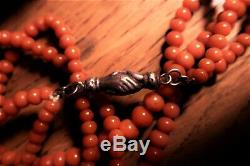 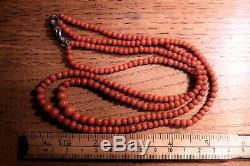 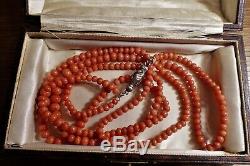 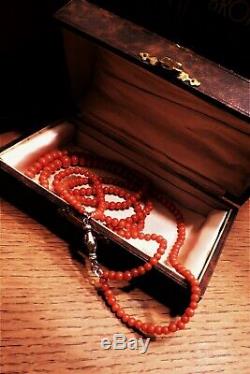 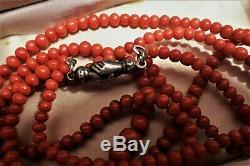 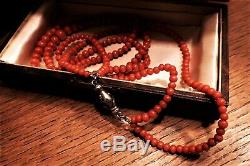 Fabulous Antique Georgian Red Coral Bead Necklace double row with Rare Silver Fede Gimmel Clasp in Antique Jewelry Box. Largest Bead 8mms Smallest Beads 4 mms. No woman of Quality in the Regency era would be without her Coral Beads. Coral was seen as an important amulet in the Georgian times and was particularly favoured by Lovers.

Beads were also given to young children to protect them against witchcraft which is why in those beautiful Georgian miniatures we so often see these Coral Necklaces elegantly worn round the neck. This wonderful Regency Era, early 19th Century Red Coral Bead Necklace consists of a double row of Finely Graduated Natural Sardinian Red Coral Beads with the fabulous rare'Fede' Clasped Hands'Gimmel' Fastener made of Silver and the wonderful patina of age. The Necklace measures 20" inches including the fastener and sitting below it is another string that measures 21" inches approximately. The beads are most beautifully and carefully graduated from the smallest beads nearest the fastener that measure approximately 4 mms to the largest bead at 8 mms. The'Fede' or'Gimmel' style fastener consists of the two clasped hands that was more often used in Rings.

The Fede or Gimmel ring is an ancient design that goes back centuries. The name'Fede Ring' comes from the old Italian for'Hands in Faith'. Rings such as these with the clasped hands motif were used in hand fasting and wedding ceremonies as far back as Ancient Roman times the symbolism is steeped in a rich deep history. Traditionally Fede rings were used as Betrothal and Wedding rings and a clasp on a necklace would have had a similar symbolism.

The use of Precious Coral,'Corallium' in jewellery dates back as far as prehistoric, ancient Egyptian, Roman times and viking eras. In Greek Myth it is believed that Coral came from the blood of Medusa the gorgon who could turn men to stone. It has always been seen as a protective amulet since antiquity. The necklace will come to you in the lovely Antique Domed Lid Jewellery Box shown in the photograph that came from a long gone jewellers in the beautiful English City of Bath.

It is a wonderful early to mid 19th century silk lined box with a pretty ornate gilt clasp that serves perfectly to keep and display your treasured antique Georgian Coral Beads in. Approximately two centuries of history and interesting mythology abound in this wonderful old Red Coral Bead necklace for you to still enjoy and wear. Please do contact me with any queries I will be happy to help. The item "Rare Regency Georgian Necklace Red Coral Beads Silver Fede Clasp in Antique Box" is in sale since Sunday, November 17, 2019. This item is in the category "Jewellery & Watches\Vintage & Antique Jewellery\Vintage Fine Jewellery\Pre-1837".

The seller is "kittyscurios" and is located in Bath. This item can be shipped to North, South, or Latin America, all countries in Europe, Australia.