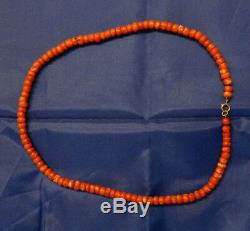 108 Mala' Tibetan coral prayer bead necklace. 108 individual red coral beads. Very desirable and sadly, increasingly rare red coral. Practically every bead has an imperfection, which is a further testament to their authenticity. No two beads are the same.

A world away from the composite, imitation'coral' eminating from factories in China. This is one of several items which I acquired during the1970's whilst living in and travelling around Nepal, India, Afghanistan & Iran.

The necklace has been professionally restrung in UK, with the addition of a gold clasp. This item would be a notable addition to any jewellery case.

Here is a brief summary of the importance of coral in Tibetan culture. Coral has been a prized material in Tibet and the Himalayan regions for many centuries.

Salmon orange to deep red beads are always the most valuable. Coral beads are also mounted or set into gold and silver jewellery, such as earrings and saddle rings. Along with amber and turquoise, coral is also sought after to create ornate hair ornaments or headdresses. Coral is also an important ingredient in Tibetan medicine and is believed to act as an antidote to poison and treats problems related to the liver. In the Tibetan culture, red coral is regarded as an efficacious amulet for giving protection and warding off negativity for the wearer.

It is often heirloomed from mother to daughter or given as part of a dowry. Sometimes an entire families wealth may be invested in coral and other precious beads as this can easily be traded in the marketplace. Due to the scarcity of these beads prices continue to rise and so coral is regarded as a very sound investment. Coral cabochons (usually mounted beads or fragments of beads) are also used to decorate statues, gaus, prayer wheels, stupas and ritual items such as mandala sets and metal tormas. In this way it is seen as a precious offering to the enlightened ones or'Three Jewels' and enhances the overall beauty of the object. It is particularly favoured as a material for Buddhist malas (prayer beads) because it is believed to magnify the power of mantra recitations and thus enhance the spiritual activity of the Dharma practitioner. Worn by both men and women, from the most humble monk to the highest ranking officials, it is hard to find a jewel that holds quite the same allure and power. The majority of antique'Tibetan' red coral originated from the Mediterranean Sea. It travelled along the silk trade route via Iran, Samarkand, Ladakh and then finally ended up in the markets of Lhasa. It was also traded to India by a direct sea route from the end of the 15th Century. This made it much easier for Tibetan traders to get a more regular supply of this material. Today, Mediterranean coral is now rightly protected from harvesting, so it has become very difficult to find genuine beads. The marketplace offers many fake coral beads and dyed alternatives from China, however, they can never be a substitute for the real thing! PLEASE NOTE: I will post to Europe and some other destinations. Please view my other items. The item "TIBETAN'108 MALA' CORAL BEAD NECKLACE" is in sale since Tuesday, January 1, 2019. This item is in the category "Collectables\Religion & Spirituality\Buddhism". The seller is "jon_the_plant" and is located in Braunton. This item can be shipped to European Union member countries.