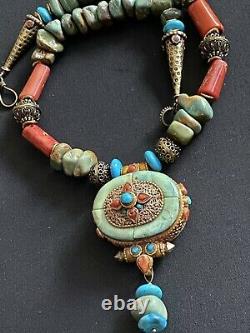 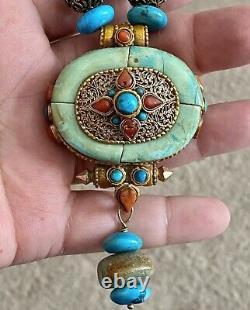 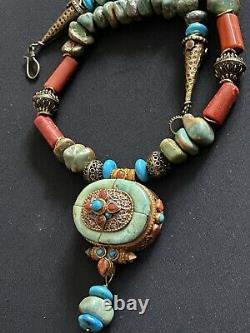 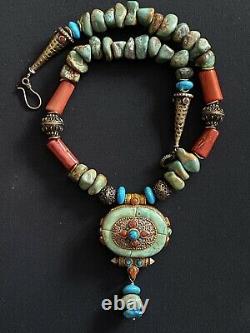 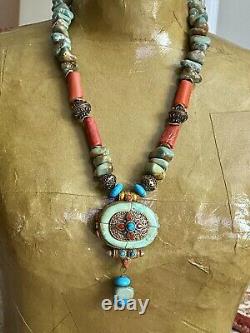 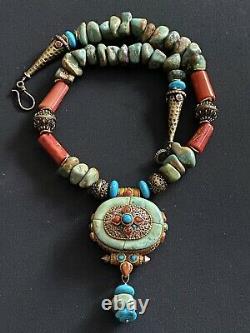 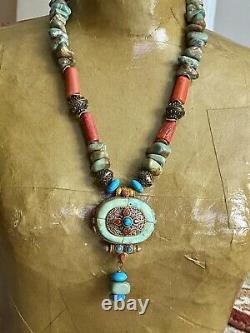 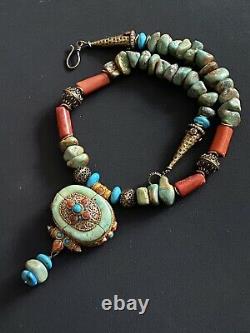 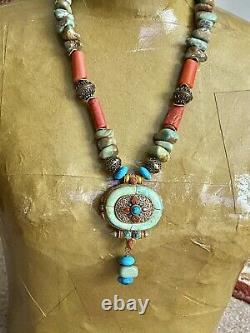 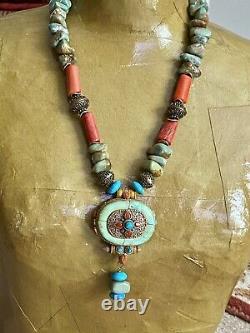 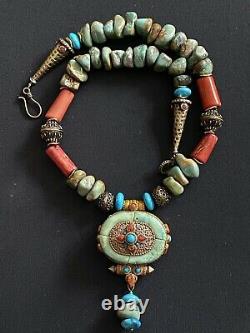 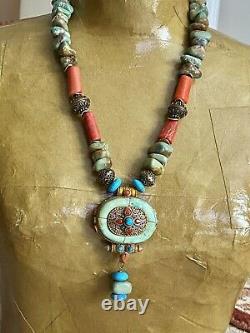 Beautiful handmade Chunky unique Bohemian Necklace. This is an old unique ghau gau obtained from Nepal a few years back and extremely hard to find.

It is stamped in the back with a flower motif and can open and close. The back of the Ghau prayer box fits snugly and is accurately sized/shaped so there should be no worry of it ever falling out. The lower piece of the Ghau is the traditional dorje with genuine turquoise and orange coral cabochons. The charm hanging on the dorje has blue and hubei green turquoise gemstones. The golden Gau Ghau vintage pendant is approximately 2.5 wide and 2 long Plus 1 of the hanging Gemstone charm.

A Gau (also spelled Ghau or Gao) is a Tibetan Buddhist amulet container or prayer box, usually made of metal and worn as jewelry. As a small container used to hold and carry powerful amuletic objects, the Gau is culturally equivalent to Latin American package amulets, African-American conjure bags or mojo hands, South American charm vials, and American wish boxes. Because they are worn as jewelry, Gaus are made of metal and are often ornamented with semi-precious stones, but they vary enormously in style according to the taste of the designer.

Many Buddhists in Tibet, Nepal, Bhutan, India, and now all over the world use a prayer box pendant called a Ghau. These ghau are mostly made of silver, however the Tibetan artisans also use brass, copper, gold and other metals. Ghau often have intricate designs, auspicious symbols and mantras inscribed on their outer surface Ghau also often contain semi-precious gemstones which have various healing effects on the wearer. Lapis Lazuli and turquoise are especially popular in Tibetan prayer box design for their beauty and healing properties. The Ghau opens to a concealed inner space, and is traditionally used by Tibetan Buddhists to hold a picture of their favorite deity or Lama, a folded up scroll of sacred mantras, special herbs or sacred relics.

The Ghau is used as an amulet to help the wearer to ward off negative energy and attract blessings. A Ghau are also used as a portable shrine and are worn on a cord around the neck and hung close to the heart. In different religions and cultures, these boxes have different names.

While Tibetan Buddhists call it a "Ghau" (Gau or Gao), Latin Americans call it a "Package Amulet, " African-Americans say "Conjure Bag" or "Mojo Hands, " Hirz or Prayer Box, South Americans have "Charm Vials" and contemporary Americans sometimes refer to them as "Wish Boxes". While there may be some debate as to where the prayer box first originated, they are treasured by many faiths, and even by nonreligious individuals. Turquoise is one of the most powerful Metaphysical healing stones. Turquoise has been a had metaphysical healing powers before the word Metaphysical was invented.

Turquoise is thought to possess significant healing properties and is often counted as a master healing stone. It is a peace and harmonizing stone that helps to decrease nervousness, tension and stress. It is believed to strengthen ones courage and personal power, fostering empathy, sensitivity and positive thinking. Many people believe that turquoise is a stone of friendship and will enhance love, loyalty and communication. Turquoise is perhaps the oldest stone in man's history, the talisman of kings, shamans, and warriors.

It is a stone of protection, strong and opaque, yet soothing to the touch, healing to the eye, as if carved from an azure heaven and slipped to earth. As a healing stone, Turquoise is among the crystal healing master stones. According to followers of the New Age, the healing powers of Turquoise can benefit the whole body, with special strengths in healing ailments of the immune, respiratory, waste and skeletal systems. Coral has been called the garden of the sea. It was once believed to be a plant, but is now known to actually contain living animals called polyps. Coral is the result of accumulated skeletal masses from these polyps. Red is considered the most sought after color but coral also can be found in pink, white, yellow and black. Records dating back thousands of years confirm that coral was used in decorative art objects.

It was believed to prevent ill fortune and offer protection from skin disease when worn as a necklace. Dreams about coral are believed to foretell recovery from a long illness. Ancients believed that Mars was composed of red coral. Coral symbolizes life and blood force energy.

Dark red coral is used for heating and stimulating the bloodstream. Pink shades restore harmony to the heart. It is used as an aid to depression, lethargy or deficient nutrition. Locations where coral can be found include the Mediterranean Sea, off the coast of Australia, the South Pacific, the waters of Japan, and Africa. The item "Nepalese Ghau & Turquoise With Orange Coral Vintage cabochon Prayer Box Necklace" is in sale since Sunday, November 1, 2020.

This item is in the category "Jewelry & Watches\Ethnic, Regional & Tribal\Necklaces & Pendants". The seller is "mimi033" and is located in Malden, Massachusetts. This item can be shipped worldwide.