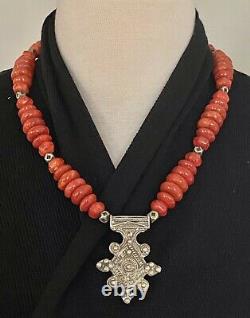 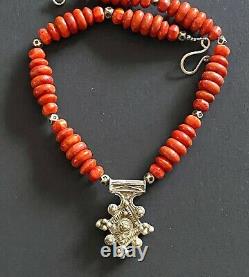 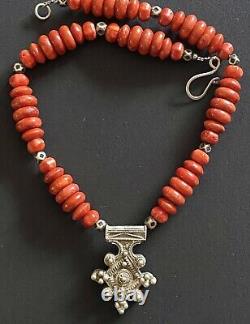 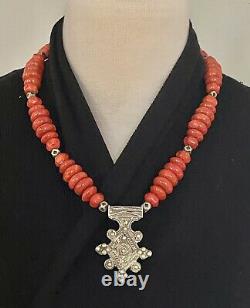 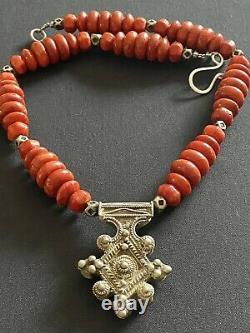 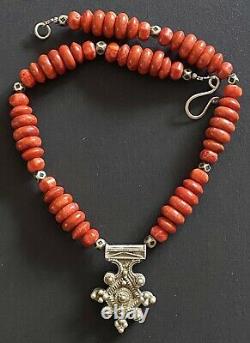 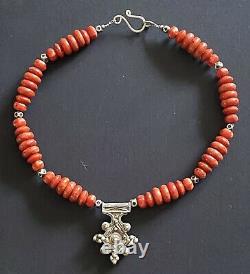 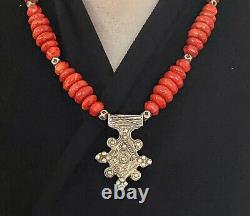 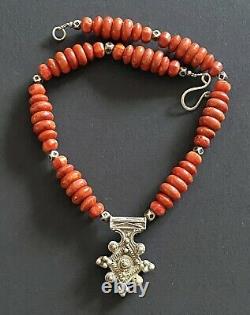 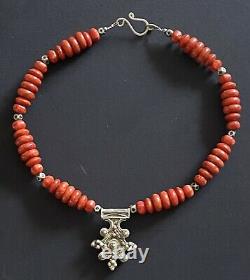 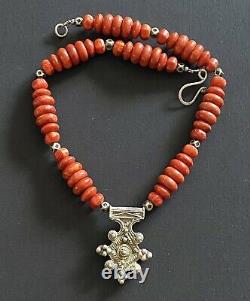 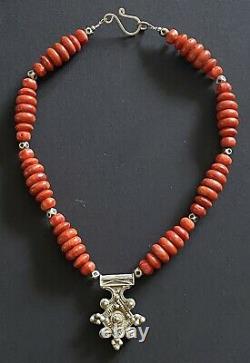 This is all beaded with beautiful orange sponge coral graduated beads from 16mm down to 12mm. These are spaced with 10 rare Niger silver square dice beads measuring 8mm. This beautiful necklace measures 22 in total length. Large old silver hook clasp closure. About the meaning of Morrocan Boghdad berber Tuareg Crosses. They derived from the Egyptian Ankh symbol from which would be derived the carteginese symbol of the Goddess Tanit and, finally, the Tuareg Crosses. They are a sex symbol: especially in Agades , Zinder and In Gall crosses is evident the presence of two elements, which can be linked to a stylized depiction of the two sex symbols: the tip, male symbol, and the ring, the symbol of women. They are said to protect from the evil eye: in the form of several types of crosses and in the decoration of almost all types appears the presence of triangular elements that constitute the representation more stylized of apotropaic eye. Special Corals are well known for their red, pink or orange skeletons that have been used since antiquity for ornament, medicine, talismans and currency. The skeletons of some coral species are so hard that they can be beautifully polished for use in sculptures and jewelry. Coral has been called the'garden of the sea'. It was once believed to be a plant, but is now known to actually contain living animals called polyps. Coral is the result of accumulated skeletal masses from these polyps.

Red is considered the most sought after color but coral also can be found in pink, white, yellow and black. Records dating back thousands of years confirm that coral was used in decorative art objects.

It was believed to prevent ill fortune and offer protection from skin disease when worn as a necklace. Dreams about coral are believed to foretell recovery from a long illness.

Pink shades restore harmony to the heart. It is used as an aid to depression, lethargy or deficient nutrition.

Locations where coral can be found include the Mediterranean Sea, off the coast of Australia, the South Pacific, the waters of Japan, and Africa. The Tuaregs are a nomadic desert tribe that inhabits a broad expanse of territory stretching from the edges of the Saharan desert of Morocco to the north as far as Burkina Faso in the south. Tuareg pendants features a unique design that may include the Milky Way, Berber Cross, Southern Cross, Shooting Star or other motifs made from white metal. The Tuareg people /twr/; also spelled Twareg or Touareg; endonym Kel Tamasheq, Kel Tagelmust are a large Berber oethnic confederation.

They principally inhabit the Sahara desert, in a vast area stretching from far southwestern Libya to southern Algeria, Niger, Mali and Burkina Faso. Traditionally nomadic pastoralists, small groups of Tuareg are also found in northern Nigeria. The Tuareg speak the Tuareg languages (also known as Tamasheq), which belong to the Berber branch of the Afro-Asiatic family. The Tuaregs have been called the "blue people" for the indigo-dye colored clothes they traditionally wear and which stains their skin. As semi-nomadic people, they are believed to be descendants of the Berber natives of North Africa.

The Tuaregs have been one of the ethnic groups that have been historically influential in the spreading of their legacy in North Africa and the adjacent Sahel region. Tuareg society has traditionally featured clan membership, social status and caste hierarchies within each political confederation.

The Tuareg have controlled several trans-Saharan trade routes, and have been an important party to the conflicts in the Saharan region during the colonial and post-colonial era. The item "Sponge coral & Berber cross Boghdad Morrocan Tuareg Tribal Handmade necklace" is in sale since Wednesday, March 31, 2021. This item is in the category "Jewelry & Watches\Vintage & Antique Jewelry\Necklaces & Pendants".

The seller is "mimi033" and is located in Malden, Massachusetts. This item can be shipped worldwide.