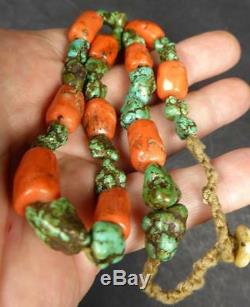 CORAL & TURQUOISE SMALL BEAD NECKLACE. This rare Tibetan Natural Turquoise and Coral bead necklace was sourced in the Himalayan Kingdom of Nepal for Spiritual-Sky. This sacred necklace has been blessed and has been worn for many years.

Length of necklace 19 inches (end to end) Length of turquoise and coral beads 15 inches (end to end). Weight of necklace 50 grams. Spirtual-Sky is releasing these special sacred and empowered items to the world. The reason for the release of these items is that the Earth as we know it is now a dark and dangerous place and we would like spiritual and sacred people to be part of the new awakening.

There are very few people in the world who can feel and sense and need this sacred and special power. Please Note: This is real coral and turquoise and has been sourced in the Himalayan Kingdom of Nepal. Real natural turquoise and coral bead necklace. This beaded necklace has been well used and the beads are of different sizes which is expected in a sacred item of this great age.

Some beads are pitted as you can see in the pictures and most beads have fantastic markings. This very old spiritual blessed turquoise and coral bead necklace has the most wonderful weathering marks and a beautiful usage patina.

These sacred turquoise and coral necklaces are prized by the Tibetan's and people from the Himalayan regions. For Tibetans, coral symbolizes blood, fire and light, making it a potent charm for life and health.

It was imported into the. From the Mediterranean long before Marco Polo's travels in the 13th century and has always been highly valued. Coral has played a very important role in religious and magical rites throught the Pacific Islands.

It is often placed on graves to guard the deceased and temples were sometimes built of lava rocks and coral. In the Mediterranean, coral was thought to contain the "life essence" of the Mother Goddess, who dwelled in the ocean in a tree of coral. There is a belief that the ocean is the home of human souls after death, and so coral is considered a very powerful amulet for the living.

It can be carried to prevent "evil spirits" from entering the body. Coral guards against accidents, acts of violence, poison, theft, possession and sterility.

Coral can effect inner changes. It dispels foolishness, nervousness, fear, depression, murderous thoughts, panic and nightmares. It gives reason, prudence, courage, and wisdom upon its bearer. If you have some coral in your bedroom at night it will produce peacefull and restfull sleep by driving away disturbing dreams.

Coral has been used in magic relating to children for thousands of years. If a piece of coral is given as a gift to a child, it ensures their future health and if placed in their room it will magically guard and protect the child. Coral can also be used to attract luck to a household.

If you take a piece of Coral and touch it to every door, window and wall in the house while you move in a clockwise direction then place the coral in a place of prominence luck will be attracted to the house. Because of its associations with the sea, coral is used as a protectant while sailing or travelling over water and will guard boats against shipwreck and protect against shark attack. Coral can be used to enchance telepathic communication between this present reality and the prior, future and other current worlds. Coral can be used to heighten and suppliment ones accomplishments in the business realm and to instill quality and excellence within ones invironment. It helps one to dispense with old "programming" and scedules, and to be open and receptive to, and perceptive of, the fresh innovative forces which are available.

In the mystic language of the psychic mind, fossilized coral represent time, eternity and evolution. They are a tangible example of how nothing in nature is wasted. Energy cannot be destroyed, only maniftations of energy. Fossilized coral is used as power tools by shamans and healers throught the world to amplify energy and can be placed apon altars/shrines as pure symbols of the earth and the ambiguity of time and to increase the spiritual power of magicial rituals.

Coral can be used to recall past lives and times that you now cannot remember when you were a child. Hold this turquoise and coral bead necklace at night in a room lit only by candlelight or moonlight, meditate while holding this sacred necklace, look at it thinking of its incredible antiquity, attune with it, feel its past life. Still your mind and breath deeply and awaken your psychic awareness. Feel this life, this body this personality slipping from you. Slide along the energy of your being (soul) beyond birth, beyond death, beyond to another life. Tibetans have always placed a high value on the power of stone beads, and Tibetan turquoise is one of the top prized stones. This turquoise is viewed by the Tibetans as a symbol for the sky. Traditionally, the larger the bead the more power it possessed, so Tibetan women spend their lifetimes trading up to a larger and more wonderfully coloured and patterned stone beads for their personal necklaces.

Some pieces can be older than 500 years. In traditional Tibetan medicine, turquoise or Yu is valued for its many healing properties. It is believed that it absorbs toxins from the body and aids liver function.

It can also be used to treat fevers, eye disease and is an antidote to poison. Turquoise is also worn as an amulet to give protection whilst dreaming. Turquoise is widely appreciated by Tibetans and all through Tibetan history Turquoise has been prized, valued and worn as jewellery, not only for preserving the family wealth but also for its application in ritual and medicinal practice. "Gyu" (pronounced "yu") the name for turquoise seems to be indigenous, indicating that knowledge of the mineral came from within and not through outside influences.

To call a turquoise a stone will offend a Tibetan who will exclaim, "This is a turquoise and not a stone, " looking upon it as a thing distinct in itself. Gemstones have always been associated with curious superstitions and turquoise is no exception. Many people have recognised that the change of colour in a turquoise gem is the direct result of variations in the state of the owners health (being in sympathy with the affections and the characteristic physical influences of the wearer). The gem grows paler and usually more green as the owner sickens or grows old, losing its colour and intensity entirely at death, but completely recovering its inherent qualities and beauty when given to a new and healthy possessor. Traditional lore avers that as turquoise is susceptible to the personality of the wearer, a gem must be treated with affection and regarded as a sentient being if its colour and lustre are to be maintained and improved.

Turquoise bestows happiness and good fortune if given by a loving hand, and sympathetic not only to the wearers health but also to the giver, paling in colour if he or she is threatened by evil. In Tibetan literature, the word for turquoise is a favourite for describing natural objects of sky-blue colour such as beautiful lakes, wells and flowers, even the manes of horses, bees and tadpoles! The hair of goddesses and the eyebrows of children born in a supernatural manner are spoken of as turquoise-blue, and Tibetans speak poetically of the sky as "the turquoise of heaven", the 13 Turquoise Heavens referring to traditional mythology. King Du-srong Mang-po who reigned during the 8. Century CE supposedly found the largest turquoise then known in the world on the top of.

A few miles north of. A family living in the city at that time had their roof showered with turquoise and other precious gems by a generous deity. Apparently this mansion still stands, somewhere near the. One famous story is the one about King Srong-tsan Sgam-po winning the hand of his beautiful princess. He was required to pass a silk thread through a coil of turquoise beads arranged in a concentric circle.

He solved the problem by tying the thread onto a queen ant, which he blew through the holes in the beads. To the amazement of the lookers-on, the ant came out at the other end of the coil dragging the thread along, and thus gained the princesss hand in marriage. Girl from Tibet with HUGE coral necklaces. To heal someone, you must first know why people suffer. If through healing them, you can show them how to stop suffering, you have fulfilled your role as a physician.

At he heart of all suffering there is a spiritual remedy that comes about from knowing the relationships between karma and suffering. Karma comes from the chaos that exists within all living creatures, all aspects of this world and the universe at large. Some chaos is good, some indifferent, some bad, but it is the stuff from which happiness and then enlightenment can be made. Girl from Tibet wearing a HUGE amount of real coral. Many of us are trying to find peace, a small place where we can enjoy our lives.

THE TRUE MEANING OF LIFE. We are visitors on this planet. We are here for ninety or one hundred years at the very most. During that period, we must try to do something good.

Something usefull, with our lives. If you contribute to other peoples happiness you will find the true goal. The true meaning of life. His Holiness The XIV th Dalai Lama. Our Sacred Blessed and Empowered items have PURE POSITIVE SACRED POWER and they can and will be attuned to you.

Do you remember long ago that you had the ability of second sight, and other special abilities. You might never have revealed this to anyone as you felt slightly afraid and were not sure in yourself. Years later life takes its toll and you now think that these special abilities that you had years ago are now gone. These abilities NEVER GO, you still have the same abilities but you now have to clear a path to open your mind and be able to go back to your childhood and let your mind open up.

When you work with our Sacred Blessed items you will soon realise that these are SACRED SPECIAL TOOLS and will work for you in many different ways. They will open up a PURE POWER FLOW FOR YOU, and enable PURE POSITIVE ENERGY to enter your divine spirit. Our sacred, rare, empowered and blessed items are being made available for the benefit of practitioners, like you, who would like to have holy objects as devotional support to your practice. Rather, we are making them available with the express wish to benefit others. All funds in excess of our costs help us to continue our activities.

The item "TIBETAN REAL CORAL and REAL TURQUOISE small BEAD NECKLACE" is in sale since Wednesday, October 1, 2014. This item is in the category "Jewellery & Watches\Ethnic & Tribal Jewellery\Asian\Tibetan". The seller is "spiritual-sky" and is located in Bournemouth. This item can be shipped worldwide.